We are all well aware of Desi Ghee. Because it is not only used for making many dishes and dishes in homes. Rather, indigenous ghee is also used extensively in the food and beverage industry, especially in the branded dessert-making industry. As far as its use in homes is concerned, its usage may also vary according to the state and style of their food and drink. If you belong to rural areas, then you do not have to depend on a branded country-made ghee company to fulfill your Desi Ghee-related needs.

Because even today the main means of the employment of people in rural areas is agriculture and animal husbandry. Therefore, the traditional process of making ghee from milk is adopted by the people and in rural areas, people buy their own desi ghee from each other and fulfill this requirement. But when it comes to cities, people living in urban areas depend on branded companies to fulfill the desi Ghee-related needs. But even then, there are various types of fake ghee being sold in the market in the name of indigenous ghee.

While there is no shortage of people in cities who do not shy away from spending more money on indigenous ghee without pure adulteration. This is to say that even though the demand for indigenous ghee is ubiquitous, the entrepreneur can start his own Desi Ghee Manufacturing Business by targeting the urban people. Before we talk in detail about the business of manufacturing domestic ghee, let us know what happens. 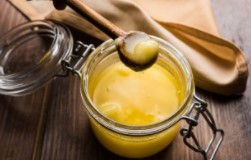 What is Desi Ghee:

If we talk about Ghee, the word has evolved from the Sanskrit word Ghrit and is one of the most well-known traditional dairy products in India and in many countries of the Middle East. Ghee is made from milk, cream, or butter of cattle of cows, buffaloes, and many other species. Ghee is a common Indian name for the clarified butter inhabited that originated in India and is used in South Asian cuisine, ghee is lactose-free as well as salt-free.

If we talk about Desi Ghee, it looks like a golden yellow liquid and it is a very tasty ingredient made from milk. Therefore, incorporating a small amount of native ghee in any food increases the taste of that food by several times. It is a dairy product so it is also gluten-free.

How much of a product will be sold can be gauged by what quantity it is used for and for what purposes. If we talk about Desi Ghee, it is a major and extremely tasty ingredient found in every Indian kitchen. This is to say that ghee is widely used in Indian cooking, it is produced after removing water from milk solids such as butter.

Therefore, its aroma and taste are very good and it is well-liked by almost all people and according to one figure, the most commonly consumed milk in dairy products after milk is native ghee. Apart from this, with the increasing population, increasing disposable income of the people, increasing knowledge of the benefits of the consumption of indigenous ghee to the people, its demand is also increasing. Desi Ghee is mainly used as follows.

Looking at the above-mentioned uses and benefits of indigenous ghee, it can be said that its demand is going to increase in the coming days, so if an entrepreneur starts a business of making indigenous ghee, then it can be beneficial for him.

How to start a business making Ghee? (How to Start Desi Ghee Manufacturing Business)

As we have already told that this work of making Desi Ghee has been going on since ancient times in India, so even today, those who do animal husbandry make indigenous ghee for their food in their own homes. Give. If they feel that the ghee available to them is more than they need, then they also sell it.

Therefore, it can be said that the entrepreneur does not need any training, etc. to start the business of making native ghee, because the native ghee is usually made by separating the butter from the whey and then tapping that butter in a fire. . So even if the entrepreneur does not know how to make ghee from milk, he can still learn this process in just a few minutes or hours. So let’s know how any aspiring entrepreneur can start his own Desi Ghee Manufacturing Business.

However, small-scale or rural level entrepreneurs can also start Desi Ghee Manufacturing Business from their home. An entrepreneur who is already doing animal husbandry or involved in the dairy farm business can make native ghee from the milk produced from his animals. Currently, fake ghee is also coming into the market. This is the reason that people often prefer to buy indigenous ghee from such an entrepreneur. Who has your own animals available?

As we have already said that if the entrepreneur starting Desi Ghee Manufacturing Business is someone who is already doing dairy farming etc. through a dairy farm etc. and is producing milk. So he does not need to contact the milk supplier but if the entrepreneur is not able to produce as much milk as he needs for his unit then he will also need to contact the other milk supplier. Because only and only milk is needed as raw material to make indigenous ghee. The entrepreneur can either contact the livestock owners in that area or can also buy milk from any dairy etc.

The demand for Desi Ghee is widespread everywhere and people are also ready to pay more for pure ghee in the cities. If the entrepreneur is starting this business only after taking into account the ghee requirements of the local people, then it may be that the entrepreneur does not need any license and registration other than an FSSAI license. But if the entrepreneur is planning to sell his product to cities by establishing his own brand, then he may need many licenses and registrations which are listed as follows.

The major and only raw material for starting a Desi Ghee Manufacturing business is milk. Although packing materials are required, only milk is required as raw material for making ghee. As far as machinery and equipment are concerned, their list is as follows.

You will be well aware of the Desi Ghee manufacturing process that there may be a slight change in the process of making native ghee depending on the states. But one domestic method which is known to us, to make native ghee from this domestic system, is first stored as milk curd, after that, the curd is changed to the form of whey and whey. In the process of converting the curd into whey, the butter separates over the whey and then the butter is removed from the whey and the butter is heated to form native ghee. Keep in mind that the method of manufacturing ghee that we have mentioned above is domestic, a different method is adopted commercially to manufacture Desi Ghee from machines, which is described briefly as follows.